Posted on October 14, 2022 by Faculty of Arts and Sciences

The Hood Museum of Art hosts Park Dae Sung's largest solo exhibition in the United States and will welcome the artist himself next month.

When Sunglim Kim first saw the painting "Heaven, Earth, and Human" by the contemporary Korean artist Park Dae Sung, she recalls feeling "dizzy, almost as if I was falling into the deep gorges depicted."

More than 7 feet wide and 8 feet tall, the painting depicts the cliffs of Korea's Mount Geumgang. Park's view from above—what he calls a "hawk-eye" perspective—pulls and immerses viewers into the scene.

"I felt great energy coming out of the painting," says Kim, then an assistant curator at the San Francisco Asian Art Museum. "It was an amazing experience."

A few years later, Kim visited Park's studio in Gyeongju, South Korea, with other curators as part of the Korea Foundation's Korean Art Curators' Workshop. "I saw not only his gigantic-sized landscapes, but very sensitive and sensual still life paintings and depictions of flowers, birds, insects, and animals," Kim says.

"Park uses the traditional medium and base—ink on paper—but he transforms the landscape into truly modern form through not only sheer size but his new perspectives, brushstrokes, colors, and artistic expression." 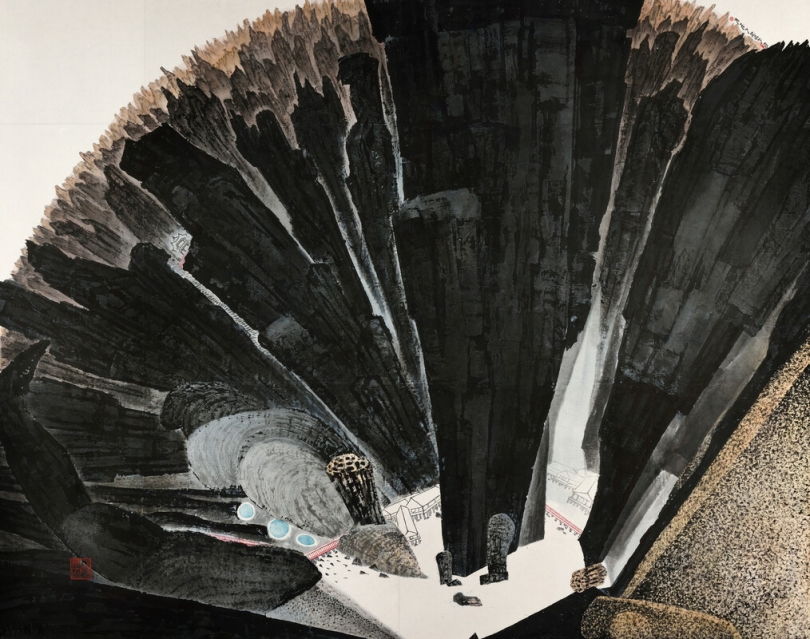 Park Dae Sung, 'Heaven, Earth, and Human' (2011). Ink and color on paper. Image courtesy of the Gana Foundation for Arts and Culture.

When a question at an academic presentation prompted Kim to ponder the status of traditional Korean ink painting, she realized that Park, "with his traditional yet very modern painting, was the answer." She decided to plan and curate a solo exhibition of his work.

Several years in the making, Park Dae Sung: Ink Reimagined opened at the Hood Museum of Art on Sept. 24 and will be on view until March 19, 2023. Now an associate professor in the  Asian Societies, Cultures, and Languages Program and Department of Art History, Kim collaborated closely with colleagues at the Hood to plan and execute the ambitious exhibition, which features 23 works, many of which are being shown for the first time in the United States.

Park is celebrated for continuing the East Asian "true view" landscape painting tradition that dates back to the 18th century, with a modern, innovative style. In his focus on calligraphy, a practice that fell out of favor as fine art in the 20th century, Park brings vast expressiveness to line work through varied stroke thickness, color, and texture.

Students in Kim's "Modern and Contemporary Korean Art" class studied Park's work before experiencing them at the museum.

"I did not quite comprehend the scale and size of his paintings," says Caitlyn King  '24. "As I entered the galleries, I was stunned by how they took up the entire wall space. These beautiful ink paintings command the attention of the room, and it felt like I was transported into the scenes of nature that Park depicts."

Like King, Hyunsung Ryu, an exchange student from Yonsei University, Seoul, felt mesmerized by the painting "Heaven, Earth, and Human."

"I felt like I was high up from the land, looking down on the human village as if I was flying," he says. "The scenery and the color of black and white got me thinking about the story of Jeon Wu Chi, the famous wizard in Korean stories. It was as if he had captured the mountains and put them on paper. Although it sounds absurd, it felt like I could step into the painting with just a little help."

Leeza Petrov '22 was drawn to Park's calligraphy. "Looking at the characters, I found their repetitive series comforting, a sort of ritualistic exercise to both create and to look at. The exhibition text mentioned that this was sort of a warmup for the artist, but I found each of the characters to be flawless in their own right."

An 'Artist and Philosopher'

Born in 1945, Park Dae Sung lost both of his parents and his left arm during an attack by North Korean sympathizers when he was 5 years old. His formal training ended shortly thereafter, and he turned his attention to painting and calligraphy.

Stating his philosophy later in life, Park said: "When the body is uncomfortable, the mind does not become sluggish and is awake. I became who I am because of my disabled arm, so I refrain from being too comfortable."

Having known him for over 15 years, Kim has observed Park's "challenging and learning spirit" firsthand. "Even in his seventies he remains very active and energetic, getting up early in the morning, praying for an hour (he is a devoted Catholic), practicing calligraphy for a couple hours (to loosen his hand), and painting several hours every day," Kim says.

"Park says that nature is his teacher and that we must find answers in nature," Kim says. "I think he is an artist and philosopher at the same time."

"Seeing his landscape paintings spanning the walls alongside his scrolls of calligraphic practices trailing down from the ceiling was striking because it demonstrated how his art was a natural part of his lifestyle," says Tiffany Cheng '23. "It reminded me of the ideal of the scholar-artist who uses his art to cultivate his soul."

"I hope people find his works restful but at the same time somewhat exciting," Kim adds. "In the midst of these turbulent times, I believe art can soothe tired and restless minds."

Bringing Park Dae Sung to Dartmouth and Beyond

The exhibition resulted in an accompanying book by Kim, Park Dae Sung: Ink Reimagined, published by the Hood Museum and distributed by University of Washington Press. The book illuminates the artist's paintings through 150 full-color images, an interview with Park, and six scholarly essays.

Through the exhibition and related academic events, Kim seeks to promote contemporary Korean art to Western audiences and enable Korean art scholars and curators to share their research and further their collaborations.

On Nov. 1, 2:25-4:45 p.m. in Carpenter 201C, five of the essay authors will present their interpretations of Park's painting and calligraphy on campus.

And at 4 p.m. on Nov. 2., Park himself will present an ink painting and demonstration at Lebanon's AVA Gallery and Art Center, followed by a book signing and reception with Korean food.

On Nov. 3, Park will discuss his work from 5 to 6 p.m. at the museum's annual Dr. Allen W. Root Contemporary Distinguished Art Lectureship. Youn Bummo, director of the National Museum of Modern and Contemporary Art, Korea, will also discuss Park's work in the exhibition at the Hood Museum.

On Friday, Nov. 4, from 11 a.m. to 5 p.m., International Symposium on Korean Art Since the 1980s: Dynamism and Expansion will be held at the museum, co-organized by Dartmouth College, the Korea Foundation, and the National Museum of Modern and Contemporary Art, Korea. The symposium will be held in Gilman Auditorium and comprised of three sessions: Session 1 (11 a.m.-12:30 p.m.), Critical Practices and Contemporaneity in Korean Art; Session 2 (2-3:30 p.m.), Pluralization of Korean Art; and Session 3 (3:50-4:50 p.m.), A Korean Artist Film Screening and Talk.

All events are open to the public.

Kim also curated an exhibit and coordinated a symposium about Park Dae Sung at the Korea Institute at Harvard University. Related exhibitions will take place at the Charles B. Wang Center at Stony Brook University and the University of Mary Washington.